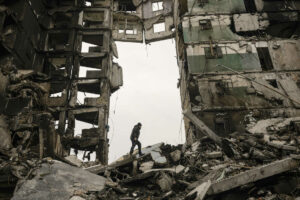 A resident looks for belongings in an apartment building destroyed during fighting between Ukrainian and Russian forces in Borodyanka, Ukraine, Tuesday, April 5, 2022. Ukrainian President Volodymyr Zelenskyy accused Russian troops of gruesome atrocities in Ukraine and told the U.N. Security Council on Tuesday that those responsible should immediately be brought up on war crimes charges in front of a tribunal like the one set up at Nuremberg after World War II.(AP Photo/Vadim Ghirda)